When it comes to flats boats there is only one name that comes to mind: “His name was William Henry Roberts. He was born in Key West in 1914 in a house on Whitehead Street, which still stands today. Everyone called him ‘Willy’. We grandkids called him Papa. Often as a small child, I remember spending summers with my cousins at my grandparent’s house behind Cal’s barbershop in Islamorada. He often took us with him mornings to his shop, which was located right across the Overseas Highway from the house, near the public beach and library.

There was a winding mangrove channel with a small white sand beach. His shop, complete with a wood boat shed overhanging the water, was on the north end of this short channel. Many a flats boat was built and launched right on this channel. Next to fishing, what fun we kids had hammering and sawing away in the morning. We had a designated stack of wood and supplies to choose from (we were strictly forbidden to touch all other materials in his shop). I’m sure we put behind schedule more than one delivery date. We would proudly show off and race our creations in the swift current at that little beach, all under Papa’s watchful eye.

My grandmother Loretta would join us when a flats boat neared completion. Willy said she had the best touch painting. I believe it was in the late sixties when I heard my grandfather say, and I quote, ‘When fiberglass trees grow, I’ll build a fiberglass flats boat.’ Well I guess curiosity got the best of him, because after designing and building his first mold, he built his first fiberglass flats skiff sometime in the sixties. As a joke, I had found an old mahogany branch, strung it with resin and glass and presented him with his ‘fiberglass’ tree. He kept it on his old desk in his new shop. This one located bay-side just south of Tavernier Creek on the Overseas Highway. This was the shop he built his fiberglass boats in. A small sign, ‘Roberts’ Custom Boats,’ his only advertisement. 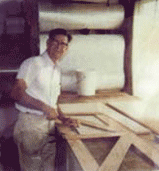 A stroke in 1990 forced him to retire and he passed away April 16th, 1993. He had a boat near completion when he suffered his stroke. His son, my uncle Myrnice, finished it. That was the last of the boats my grandfather built. As a young adult my memories of this shop are clear. The pride of his craftsmanship and painstaking attention to detail went into each built boat manufactured here. Often a relative, his son Myrnice, son in-law Donald, or grandson David, along with others worked with him as helpers. Some were working in trade for a Willy of their own.

They say imitation is the sincerest form of flattery. There have been many unauthorized knockoffs of my grandfather’s flats skiffs. Only at Willy Roberts Boats does the tradition Willy Roberts began so many years ago continue.”